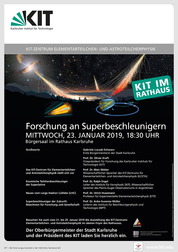 On 23 January 2019, KCETA again presented an event for the Karlsruhe public in the series "KIT im Rathaus". There were lectures on the topic "Forschung an Superbeschleunigern":

See the flyer of the event 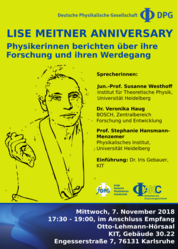 The WDR-mouse opens doors: On the mouse fan door opener day, children can take a look behind doors that conceal something interesting but are normally closed. This year with the participation of the KCETA Institute for Beam Physics and Technology (IBPT).

IBPT staff introduced the young researchers to the secrets of modern technologies. Under the motto "As fast as light - on the trail of racing particles", the mouse fans carried out small experiments and found out what telephone, microwave and vacuum cleaner have to do with particle accelerators. Accompanying parents could use the time to learn more about KIT and its work for science and society.

"It was an exhausting but also very successful day for everyone involved," said Professor Anke-Susanne Müller, Director of the IBPT and co-organiser of the KIT contributions. She reported on enthusiastic feedback from parents: "In a few years my daughter will be back here - for studying!


Oktober 1, 2018 – Public Talk on the Future of Particle Physics 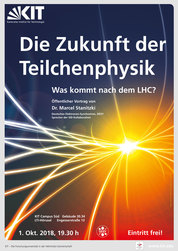 This was the title of a public talk given in the frame of the workshop "Invisibles18" (see below) at the Karlsruhe Institute of Technology.

In the Tulla lecture hall, which was filled to capacity, Prof. Susanne Mertens of the TUM fascinated the Karlsruhe public with her insights into the largest and smallest structures of the cosmos and into the large-scale experiment KATRIN located at Campus North. 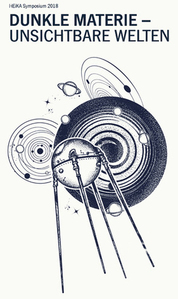 With this symposium HEiKA once again addressed scientists, students and the public. The symposium was an open meeting for everybody. Top-class speakers illuminated the topic DARK MATTER from different perspectives. 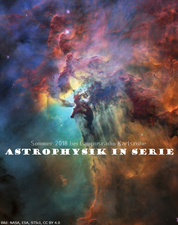 "Did you already dream about the stars as a child and wanted to become an astronaut? Were you seriously disappointed with your astronomy and physics lessons at school and did you choose another profession? Only to read (astro) physics books after work and watch "Star Trek" or "The Orville" or "Big Bang Theory". Do you recognize each other? Then we have the right thing for you this summer: "Astrophysics in series". Four programs dealing with the universe - from theory to practical star observation."

With this teaser, Campusradio Karlsruhe launched a series of live-programmes on the big questions of the universe on May 16, 2018. The guest of the first show was KCETA-PI Prof. Thomas Schwetz-Mangold.

On the third Nacht der Wissenschaft at KIT from November 24 to 25, 2017 between 8 p.m. and 4 a.m., many exciting lectures from more than 10 departments were on the program for interested citizens of Karlsruhe.

LHC at CERN: On the trail of the Big Bang with major collisions
Speaker: Prof. Dr. Thomas Müller
8 p.m. 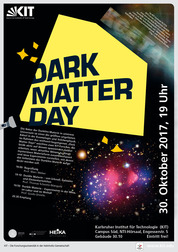 The nature of dark matter in our universe is one of the greatest unsolved mysteries in cosmology and particle physics. Within the framework of the "Dark Matter Day", which is being held worldwide, two KIT researchers, both of whom are actively working in this exciting field, summarized our current knowledge of this mysterious form of matter and presented new experiments with which the secret of dark matter is to be uncovered.

The interest of the Karlsruhe public was so great that the NTI auditorium on Campus South was filled to the last seat and no more standing room was available.

After a welcome address by Prof. Marc Weber, Prof. Thomas Schwetz-Mangold spoke on the topic "Dark Matter - from Big Bang, Galaxies and Elementary Particles" and then Prof. Guido Drexlin on "Dark Matter - Experiments in the Mine, in the Laboratory and in Space".

Pictures of the event

With this exhibition Lise Meitner, one of the most important female physicists of her time, was honoured. It is a shining example of how women break new ground and make breakthroughs in science.

Together with Lise Meitner, other female physicists were portrayed. In personal reports, they explained their scientific career, their fields of research and their wishes.

The central aim of the exhibition was to encourage young people, especially young women, to devote themselves to physics and to inspire them for the MINT subjects (mathematics, computer science, natural sciences and technology). Physics is an important part of our culture and also offers excellent career prospects. There are currently around 5,000 vacancies for physicists in Germany alone. This number corresponds to two complete graduate classes in physics.

The exhibition was initiated by the DPG and the Austrian Physical Society and funded by the Federal Ministry of Education and Research (BMBF). It is part of the "National Pact for Women in MINT Professions" launched in Germany by the BMBF.

The exhibition opened on January 27, 2017 with a vernissage and could be visited until March 5, 2017 at the KIT Campus South in the foyer CFN.

More information about the exhibition

Corrections to the history of science about "Hitler's nuclear bomb" 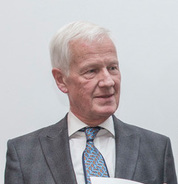 Prof. Dr. Manfred Popp will give a lecture on November 30th at 4 p.m. in the IKP auditorium on the topic "Because it is not allowed to be what cannot be... corrections to the history of science about "Hitler's nuclear bomb".

Abstract:
"When I wanted to start the planned history of the (Core) Research Centre Karlsruhe with a prologue on the'predecessor organisation', the'Uranium Association' during the Second World War, growing doubts arose from reading the specialist literature as to whether it really could have been as it has been in the history books for over 25 years: The construction of a German nuclear bomb in the'Third Reich' had not taken place for economic reasons alone, the German physicists had known enough to be able to build it. After careful study of the original documents, I have come to the conclusion that this is not true. An article by me was published in the journal'Berichte zur Wissenschaftsgeschichte': (Link). A short version can be found in'Spektrum der Wissenschaft digital', another article will be the title story of the December issue of'Spektrum der Wissenschaft'. I will present these results on 30 November and put them up for discussion." 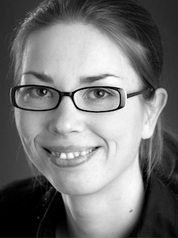 Since they entered the world of particle physics in 1930 with a hypothesis by the theoretical physicist Wolfgang Pauli, neutrinos have been regarded as mass-free and hardly detectable "ghost particles". It is indeed notoriously difficult to capture them in detectors - but since the findings of the neutrino oscillation experiments that won the Nobel Prize in physics in 2015, we know that neutrinos must have a mass. However, this is tiny compared to the masses of other particles, which puzzles the scientists.

With the KATRIN experiment, the world's most accurate particle scale is currently being developed at the Karlsruhe Institute of Technology, with which an international team of researchers finally wants to track down the mass of neutrinos. Among other things, the scientists use a 24 m long and 10 m diameter stainless steel tank under high voltage, in which ultra-high vacuum also prevails. This is only one of many technical challenges that physicists have to face in order to solve the mystery of the neutrino masses.

On May 2, Kathrin Valerius, head of the Helmholtz-University Young Investigators Group KATRIN, presented exciting things about the huge particle scale to a broad audience with curiosity and interest in physics at the University of Stuttgart. 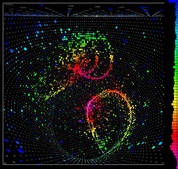 The "Night of Science" at KIT took place for the first time on the night of January 29 to 30, 2016. In exciting lectures, lecturers from various KIT departments gave insights into their subject area. Between the lectures, visitors and lecturers were able to exchange new insights over meals and hot/cold drinks.

Neutrino oscillations, Schrödinger's cat and the origin of matter

Where is the origin of all matter? To answer this question, he undertook a journey into the world of the smallest particles. The neutrino is one of the most common particles in the universe and it penetrates normal matter practically without interaction. The discovery of neutrino oscillatins, which won the 2015 Nobel Prize in Physics, proves that neutrinos have a (albeit tiny) mass.

This has fundamental effects in cosmology and elementary particle physics and brings about a decisive equilibrium. Why all this plays a decisive role for our existence (and for Schrödinger's cat) was explained in this lecture.

Record attendance at "KIT im Rathaus: News from the World of the Smallest Particles"

Record attendance at the City Hall

In the series "KIT im Rathaus", the Lord Mayor of Karlsruhe and the President of KIT invited to an event on January 20, 2015 in the Bürgersaal in Karlsruhe City Hall on the topic "News from the World of the Smallest Particles".

The citizens of Karlsruhe found the research in particle and astroparticle physics so exciting that they flocked to the city hall and set a new visitor record for the series "KIT im Rathaus".In addition to greetings by Wolfram Jäger (First Mayor of the City of Karlsruhe) and Prof. Dr.-Ing. Detlef Löhe (Vice President for Research and Information at KIT), the following presentations were given:

"Introduction to the KIT Center for Elementary Particles and Astroparticle Physics"
Prof. Dr. Johannes Blümer
Head of the Institute of Nuclear Physics and Scientific Spokesman of KCETA and KSETA

"The discovery of the Higgs particle or how the particles get their mass"
Prof. Dr. Margarete Mühlleitner
Institute of Theoretical Physics

All presentations have been recorded and are online.


Public lectures at the conference "Astroparticle Physics in Germany" 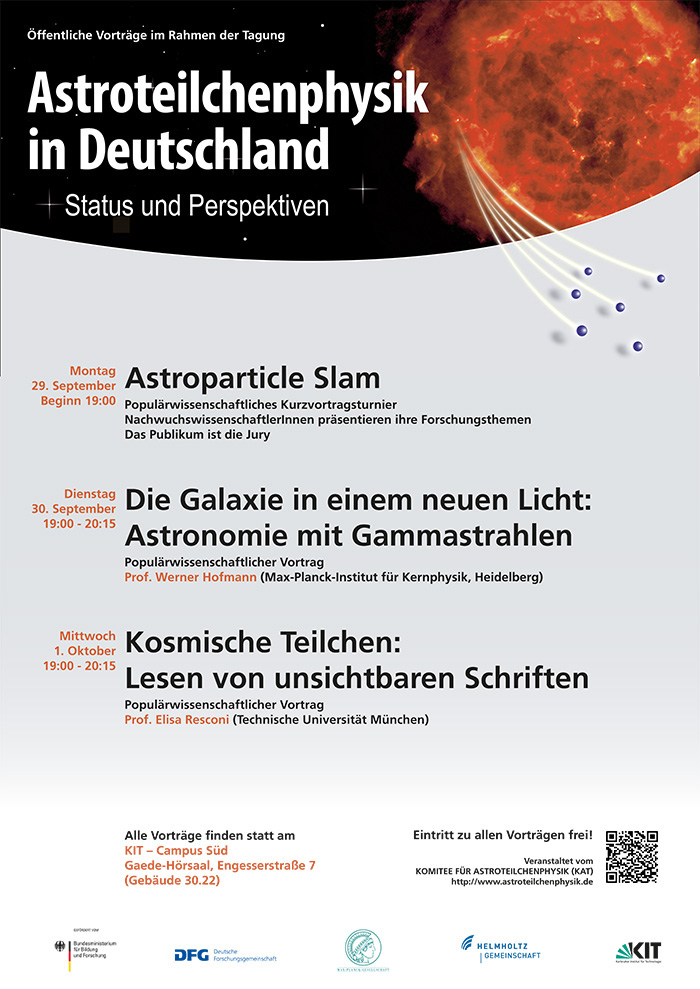 With two public evening lectures and an Astroparticle Slam, astroparticle physicists in Karlsruhe informed about the structure of the universe and current research.

New windows on the universe have been opened by researchers in recent years. Elementary particles from the most energetic objects in the cosmos such as black holes, supernova remnants and active galaxy nuclei allow conclusions to be drawn about fascinating processes. The latest findings were presented at three free public events:

In only eight minutes, eight doctoral students of astroparticle physics presented their research: entertaining and understandable, curious and transverse. Read here which of the lectures the audience selected as the overall winner.

Over the last decade, astronomy has opened a new window into space: extremely high-energy gamma rays. Gamma rays allow astrophysicists to search for exotic dark matter in the cosmos or to scan the structure of space and time on the smallest scales. The energy of such gamma quanta is 1000 billion times higher than that of visible light; they can no longer be generated by thermal processes - the radiation of hot bodies - but show us another aspect of the universe: the "non-thermal universe". Special instruments, such as the H.E.S.S. telescope system in Namibia, can be used to visualize the "traces" that gamma quanta leave behind when they hit the Earth's atmosphere. The surprising result of the work of the last decade is that a multitude of such extreme radiation sources exist in the cosmos and that these probably influenced the evolution of the cosmos.

To understand the universe and decipher its complex blueprint, physicists use telescopes and detectors to observe the sky. The fantastic images of shining galaxies are well known. Light, electromagnetic radiation, is a familiar cosmic information source; others, such as neutrinos or cosmic radiation, are less so. We can only directly observe the processes inside stars and active galaxies with the help of neutrinos - even if some of the particle properties of neutrinos are still a mystery to us. Cosmic rays and high-energy neutrinos give us information about the most energetic processes in our universe. Only if we evaluate all these sources of information can we "read" the construction plan of our universe.


last change: 2019-04-12 KIT – The Research University in the Helmholtz Association