Research and education of the KIT Center Elementary Particle and Astroparticle Physics (KCETA) are funded by the State of Baden-Württemberg, the Helmholtz Association, the Federal Ministry for Education and Research (BMBF), the German Research Association (DFG) and the European Union (EU). KCETA’s activities are in the following fields of research: 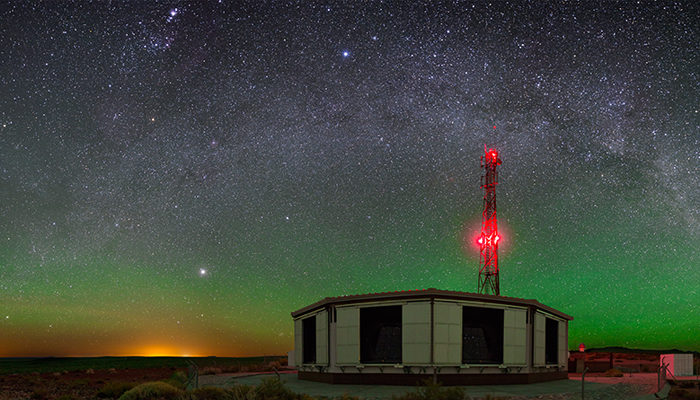 The Pierre Auger Observatory on an area of 3000 square kilometres in the Argentine Pampa consists of more than 1600 autonomous tanks: In highly pure water, energetic particles produce light flashes. In addition, four stations with 27 telescopes at the edge of the detector field observe the light tracks of cosmic particle showers. Underground muon detectors and an array of radio antenna stations complete the experimental set-up.
At lower energies experimental efforts in measuring cosmic rays were performed by the experiment KASCADE-Grande on KIT’s northern campus, where still the data is being analysed and prepared for public use via the web interface KCDC. Other activities in this research field concern cosmic ray measurements in the Siberian taiga (TUNKA-REX) as well as the air shower simulation package CORSIKA. 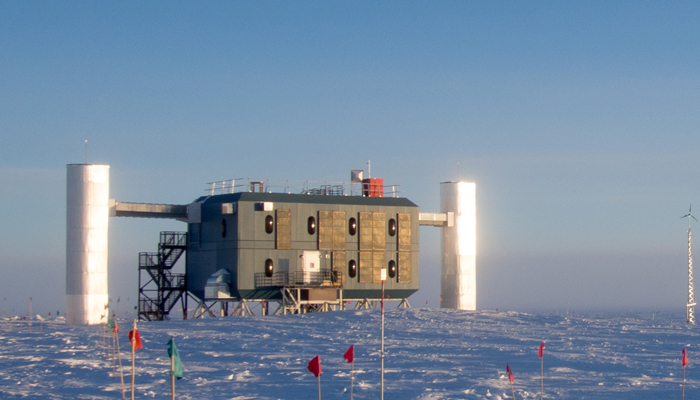 IceCube is the neutrino observatory located at the South Pole consisting of optical modules within a cubic kilometer of Antarctic ice. Neutrinos, as almost elusive particles, are great cosmic messengers possibly pointing to the extreme astrophysical sources and giving insight to processes involved in creating highest energy particles. The surface part of IceCube, IceTop, including 162 ice Cherenkov tanks, enables the study of cosmic-ray air-showers and acts as a veto for astrophysical events. Our group at KIT is mainly working in the frame of the next generation of the IceCube experiment, IceCube-Gen2. 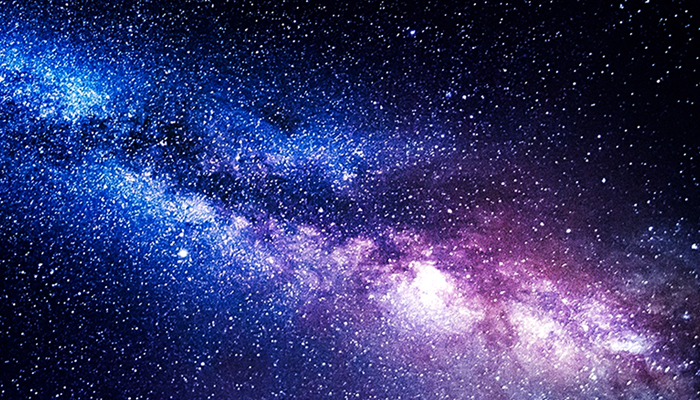 The Dark Matter Group is conducting research at the Karlsruhe Institute of Technology (KIT) to unravel the nature of "dark matter", one of the greatest mysteries in the Universe. Although Dark Matter manifests itself in many astrophysical and cosmological observations, its particle nature remains unknown so far. Due to the required properties as Dark Matter particle, none of the elementary particles constituting the "Standard Model of Particle Physics" (SM) can make up Dark Matter. Thus, physics beyond the SM is needed. There are many theoretical extensions of the SM giving rise to DM candidates such as the axion or a sterile neutrino. Another model called supersymmetry could naturally contain a lightest supersymmetric particle (LSP) as DM candidate being the so-called weakly interacting massive particle (WIMP).
Theory groups at KIT do research on models and phenomenology on dark matter. We are conducting intensive research and development (R&D) for the current search for dark matter as well as for the next generation of experiments. The Dark Matter Group at the IAP of KIT is a member of the XENON Collaboration (since 2019) and participates in the construction of the XENONnT experiment. Since 2018, we are involved in the development of the follow-up experiment DARWIN. From 2005 to 2020, we have significantly contributed to the setup, operation and data analysis of the EDELWEISS experiment. 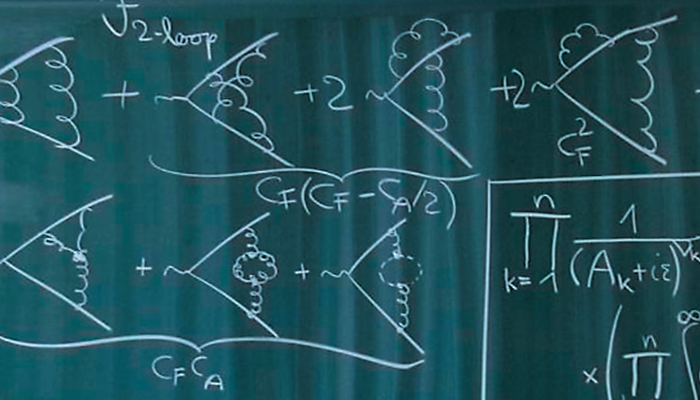 The fundamental building-blocks of matter, elementary particles, are described by the so-called standard model which provides information about their properties and the forces acting between them.
The research groups at KIT which work in theoretical particle physics perform complex perturbative calculations and non-perturbative considerations within the standard model or of hypothetical theories of New Physics in order to test the quantum nature of the theory and to extract fundamental constants of nature. 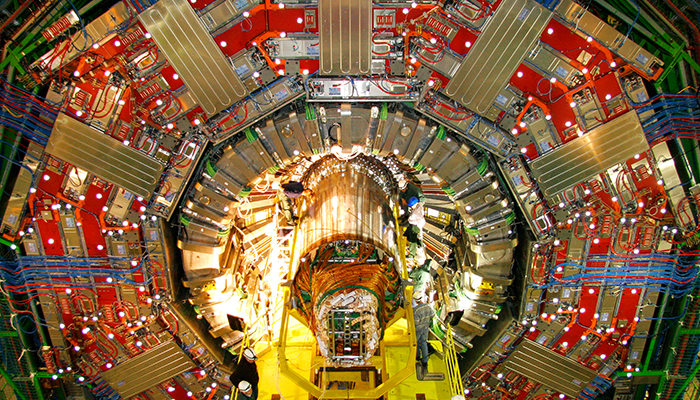 Teams from KIT research at the world’s most powerful particle accelerators: the high luminosity electron-positron collider Super KEKb at KEK laboratory in Tsukuba, Japan, at the Tevatron Collider at Fermilab (USA) and at the Large Hadron Collider (LHC) at CERN, Switzerland. At the LHC which started operation in 2009, conditions are generated for reactions that took place about 10-12 seconds after the Big Bang. The CMS detector is one of four large detectors installed at the LHC to investigate these reactions.
Teams from KSETA member institute ETP have contributed since 1995 to the construction of the detector and to the data analysis which culminated in 2012 in the discovery of the Higgs Boson said to be responsible for the generation of mass. With this discovery, the Standard Model of particles and forces has been completed. The aim of the forthcoming runs is mostly to measure accurately the properties of the Higgs Boson and its interactions with other particles and to search for signs of physics beyond the Standard Model such as Dark Matter particles which may be produced at the LHC. 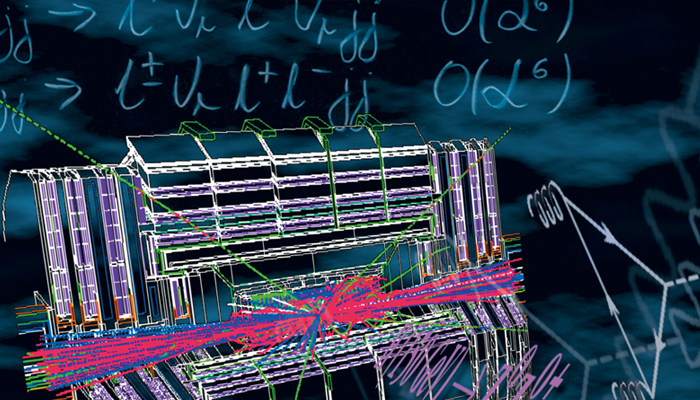 Information about the forces acting between elementary particles is obtained by experiments, in which particles are scattered at very high energies. Highest energies and, hence, smallest distances are reached at modern colliders, such as the LHC at Geneva. The theoretical collider physics groups at KIT make predictions for these experiments and helps interpreting the data. 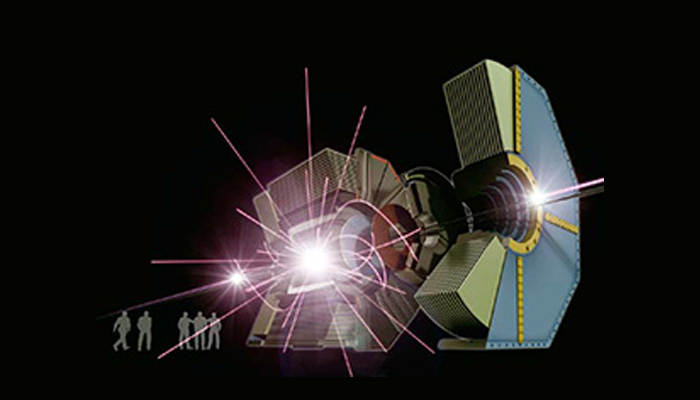 Matter comes in flavours providing a rich spectrum of phenomena to be studied. Doing this with highest precision for processes, that the standard theory of particle physics suppresses or forbids, allows to find hints for physics beyond the known and for mass scales beyond any direct reach. Especially the subtle breaking of symmetries and processes with quantum loops are promising. But only if theoretical wit and experimental finesse are optimally combined to assemble the splintered and scattered hints to a full mosaic of the fundamental picture.
This is the approach we are taking in our theoretical physics groups at KIT and in the Belle II experiment which will take data with an integrated luminosity 1000 times that of its closest competitor LHCb. 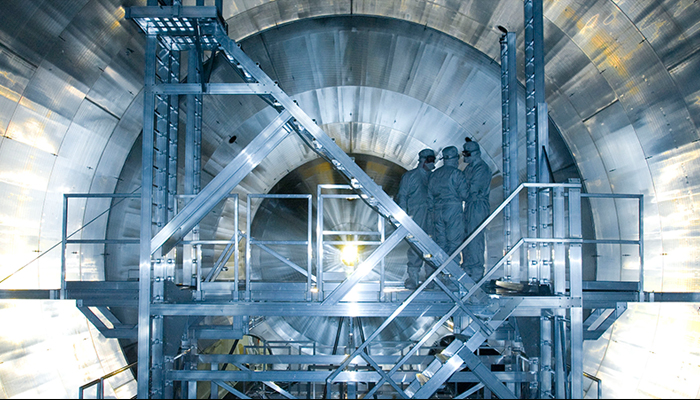 Neutrinos play a key role for our understanding of the Universe at the largest scales, as truly enormous numbers of neutrinos have been produced in the Big Bang. Their investigation touches and unifies fundamental questions of particle physics and cosmology.
To understand the role of these weakly interacting particles one has to measure the uncharted mass scale and mass hierarchy of neutrinos. The Karlsruhe Tritium Neutrino Experiment KATRIN will be the first worldwide to measure directly and model independent the mass of neutrinos with a sufficient sensitivity to determine their role as cosmic architects. But also in particle physics measured neutrino properties like KATRINs mass scale measurement provide unique access to (novel) extensions of the standard model.
Not only experimental physicists, but also theoretical particle physicists at KIT conduct research in this field. 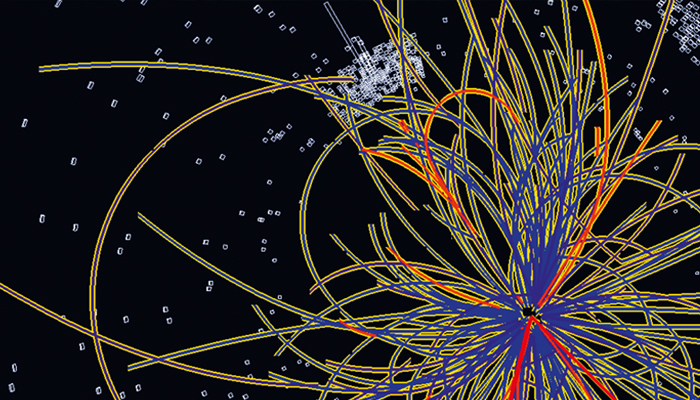 Research in the field of particle and astroparticle physics is not feasible without the use of high-performance computers. Optimal use of computer resources, however, requires the implementation of effective algorithms in specialized computer programs. On various levels, KIT develops software that is used to solve physical problems in particle and astroparticle physics.
High experimental precision requires quantum effects to be considered in theoretical predictions. Researchers at KIT are working on a largely automated calculation of quantum corrections based on methods of perturbation theory.
When calculating scattering cross sections in a mathematical theory describing the interaction of elementary particles, enormous amounts of data are generated which have to be processed efficiently. At KIT, a worldwide unique project is being pursued, which allows the parallel processing of large data flows with the help of a computer algebra system.
To interpret the experimental results obtained at the LHC, particle collisions are simulated and compared with the experiment. In an international collaboration, KIT researchers are developing a software package to run such simulations with high precision. 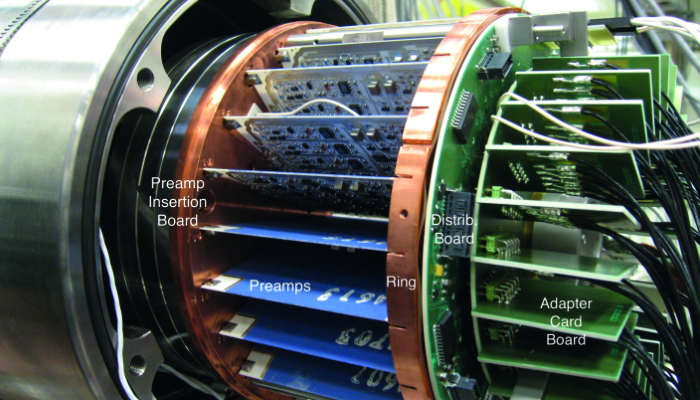 Cutting-edge experiments rely critically on cutting-edge detector technology and instrumentation. KIT has a very strong history in conceptual detector design, layout, construction and operation. With current accelerator facilities or observatories like the LHC at CERN, Geneva, being in operation, KCETA scientists are already working on the development of novel detectors and technologies for the next generation of experiments. We are always considering the complete signal processing chain including sensors, analog and digital electronics, online and offline data analysis and long-term data storage. Novel sensing concepts are being developed, and the shrinking of transistor sizes requires careful consideration of analog effects in custom integrated circuit design. We build on unique assembly infrastructures and testing facilities.
Emphasis is put in particular on new technologies for highly integrated, pixelated detector systems, as well as sensors for electromagnetic waves like radio antenna systems. The innovative sensors including semiconductor and other sensing media, lownoise, low-power and cryogenic detectors, ultra-fast data transfer and real-time data reconstruction techniques. Our integrated systems design includes tailored analysis and visualization of the ever-increasing data streams generated by the detector system.
Efficient algorithms are embedded in hardware and software. Frequently so-called trigger algorithms play a crucial part in distinguishing real and background events within microseconds to cope with the flood of data.
Our application fields range from astroparticle physics and high-energy physics to Dark Matter searches and novel beam monitoring devices for THz radiation with picosecond time resolution. 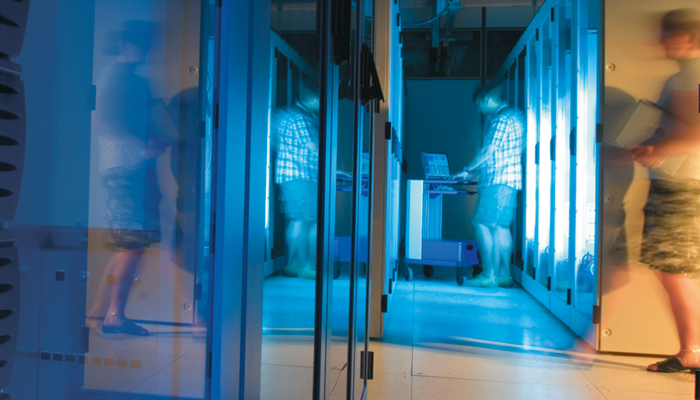 Large-scale data management systems, high-throughput computing and highperformance computers are increasingly important for particle and astroparticle physics.
Limited computing and data resources and the expected high data rates of the upcoming particle and astroparticle physics experiments, such as Belle-II, the High Luminosity LHC or the upgraded Pierre Auger Observatory, pose a major challenge.
Significant improvements of the existing data analysis algorithms and in particular also the computing models are required to cope with the huge amounts of data. At KIT, interdisciplinary teams from physics and computer science develop efficient algorithms, scalable methods and powerful tools for the evolving federated computing and data infrastructures that are indispensable to solve the grand challenges in science, such as the European Open Science Cloud (EOSC).
GridKa, the German Tier-1 centre of the Worldwide LHC Computing Grid (WLCG) is further developed and enhanced to play its role as a data and analysis hub for high energy and astroparticle physics in these federated infrastructures, in particular the Helmholtz Data Federation (HDF), a federated research data infrastructure for Germany and national building block for the EOSC. 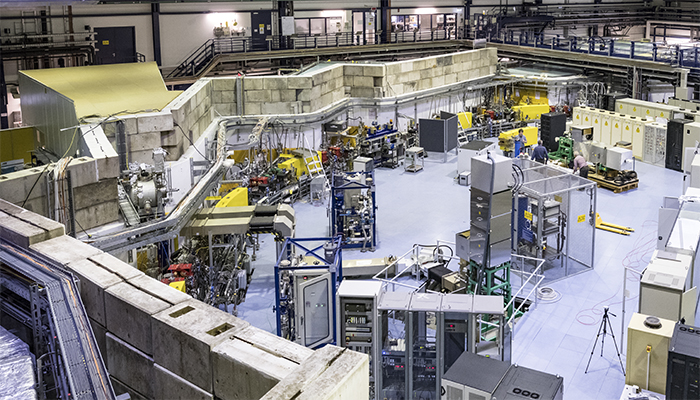 At the Institute of Accelerator Physics and Technology (IBPT), teams of experts from various disciplines are working together to develop innovative technologies for tomorrow’s particle accelerators, from radiation diagnosis systems for the highest data rates to special magnets made of high-temperature superconductors.
The IBPT operates several particle accelerators for the generation and diagnostics of ultra-short electron bunches. In the Karlsruhe Research Accelerator (KARA), a 110m long synchrotron light source, electrons are stored at almost the speed of light. The Far-Infrared Linac and Test Experiment (FLUTE), based on a linear accelerator, is designed for systematic studies at the forefront of modern short-pulse accelerators. In the ATHENA project, a laser plasma accelerator is being developed using a terawatt femtosecond laser system at IBPT.
With data rates in the range of gigabytes per second, "big data" is created, which among others is analyzed using machine learning methods. We develop our own efficient simulation programs for the calculation of the non-linear electron dynamics, described by the Vlasov-Fokker-Planck equation, which enable state-of-the-art simulations even on laptops.
The IBPT cooperates across disciplines with partners at KIT, national, and international collaborators, such as CERN. This includes studies on the 100 km long Future Circular Collider as well as novel ultra-compact particle accelerators.
A broad scope of technologies and deep insights into accelerator physics processes in connection with many specialization possibilities give graduates an excellent starting point for a career in research institutions or in industry.

The scientific topics are continuously developed. The driving forces in this dynamical process are the scientific curiosity as well as the program cycles of the funding programs mentioned above. Presently, we discuss as possible new activities the multi-messenger astroparticle physics with cosmic rays, the extended and intensified search for Dark Matter in direct collision experiments and at accelerators, the constitution of the theoretical astroparticle physics , the close interconnection of theoretical and experimental studies by the evaluation of LHC data and the application of GRID computing.