Expedition into the world of elementary particles

For the Germany-wide "Woche der Teilchenwelt" from November 2 to 8, 2020, KCETA invited people interested in science

How was the universe created? What do we consist of? What does the LHC at CERN investigate?

These were the questions that science enthusiasts were able to pursue during the "Woche der Teilchenwelt" from 2 to 8 November 2020. All over Germany, the partner institutes of Netzwerk Teilchenwelt invited visitors to learn about particle and astroparticle physics and both, young and old alike were able to visit numerous events online – including guided tours, masterclasses and lectures.

During the virtual tour to the KATRIN experiment, which was conducted by KCETA scientists, interested participants were given both interesting information about the mysterious neutrinos – whose mass is measured with the KATRIN experiment – and an insight into the size and complexity of the experiment.

The "Woche der Teilchenwelt" took on an international character with the inclusion of the International Cosmic Day. Scientists from KCETA also took part in this event and evaluated data from the KASCADE experiment together with a group of students from Austria. Even though the experiment, which was previously located at the Campus North of KIT, has now been shut down, the data is still available via the KCDC web portal and the evaluation was prepared for the pupils using a Jupyter Notebook.

Both events have received positive feedback and will be repeated in the future for other science enthusiasts.

Information about the "Woche der Teilchenwelt"

On March 5, 2020, Mr. Pascal Revel, Counsellor for Science and Technology of the French Embassy in Germany, and Mr. Hervé Martin, University Tutor for Science Cooperation in Bavaria and Baden-Württemberg, visited KIT for the first time. Both visitors first had the opportunity to see the KATRIN experiment and to have it explained by Kathrin Valerius and Magnus Schloesser from the Institute of Nuclear Physics (IKP). At the subsequent meeting, Andreas Haungs (IKP) and Stefan Bekavac (Division V) presented the KIT Division V - Physics and Mathematics and the planned cooperation project between the Helmholtz Association and the French Centre National de la Recherche Scientifique (CNRS).

This talk will be held in German language.

Ultra-High Energy Cosmic-Rays
Cosmic-rays are charged particles constantly bombarding the Earth and are one of the cosmic messengers that help us understand our Universe. At the highest energies, they are not much deflected by the Galactic and extragalactic magnetic fields, opening up the possibility of a new window in astronomy, the observation of the near-by Universe with charged-particles. The goal of the Pierre Auger Observatory is to study the nature and origin of those ultra-high energy cosmic rays, whose energy exceeds more than 100,000 times the energy that can be achieved in man-made accelerators.

The Pierre Auger Observatory
The Pierre Auger Observatory was conceived by Jim Cronin, Alan Watson and other scientists in 1991 to address the mysteries of the origin and nature of the highest-energy cosmic rays. It was clear to them that only a very large detector would reach the exposure to collect enough events to answer the questions raised by a century of earlier experiments. The Observatory design employs a „hybrid“ detector system consisting of a 3000 km2 array of 1660 particle detectors overlooked by 27 optical telescopes. These complementary detector techniques record both the particles and the faint fluorescence light resulting from the gigantic particle cascade initiated in the atmosphere by these mysterious cosmic rays. Soon after the foundation in 1999, construction of the Observatory started and was completed in 2008.

20th Anniversary
Scientists of the 90 participating institutes and groups, as well as representatives of all 17 member states of the international collaboration met in Malargüe, Argentina in mid-November to celebrate the 20th anniversary of the experiment as well as the scientific results achieved so far. A scientific symposium opened the festivities and highlighted the state of research. On the second day, the participants visited the detectors of the Observatory in the Argentine Pampa. Many of the scientists and guests participated also in the parade for the anniversary of the city of Malargüe.  The meeting continued with a ceremonial act at the campus of the Observatory. Venerable members of the collaboration as well as representatives of funding agencies and local politicians addressed the audience and congratulated the collaboration not only on the scientific successes, but also on the social relevance and impact of the project in the province of Mendoza. One highlight of the ceremony, which was moderated by the spokesperson of the collaboration, Prof. Dr. Ralph Engel from KCETA/KIT, was the conferral of the status “Honorable Senator” to the Pierre Auger Observatory by the Senate of Argentina. After unveiling a sculpture by Juan Pezzani symbolizing the role of the Pierre Auger Observatory in Argentina, the meeting concluded with a dinner banquet with typical Argentine barbecue and wine.

Among the high-ranking guests were numerous representatives of the supporting funding agencies, participating universities and institutes, as well as members of the Argentine federal and province governments. In Germany, groups of RWTH Aachen, Universität Hamburg, Karlsruher Institut für Technologie (KIT), Universität Siegen, and Bergische Universität Wuppertal participate in the Pierre Auger Observatory, of which representatives attended in the celebration. KIT was represented by the KIT Vice President for Research, Prof. Dr. Oliver Kraft, the Head of Division V, Prof. Dr. Johannes Blümer, and the Head of the Department for International Affairs, Dr. Klaus Rümmele.

A Bright Future
Spurred by the science results obtained so far, the Observatory is currently undergoing an upgrade („AugerPrime“), mostly aimed at improving the sensitivity of the observatory to the particle type and mass of ultra-high energy cosmic rays. This is done by installing new electronics, and additional and complementary detectors, allowing for a better separation of the type of the incoming particle on an event-by-event basis. The added observables are critical to select the subset of particle cascades that were produced most likely by lighter primary cosmic rays, which in turn may hold the key to identifying and studying the cosmic accelerators outside our own galaxy. More generally, the data collected with AugerPrime will also be used to explore fundamental particle physics at energies beyond those accessible at terrestrial accelerators, and perhaps yield the observation of new physics phenomena. 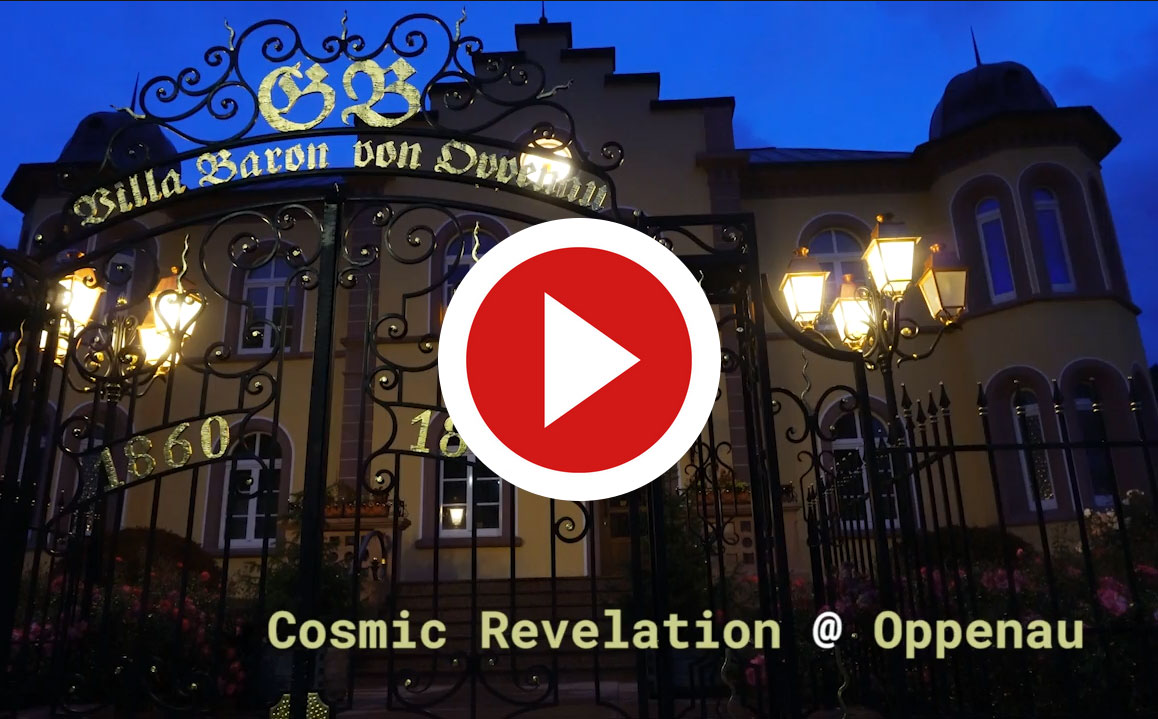 In October 2019 the move of the imachination labs into the new premises in the 'Villa Baron von Oppenau' was celebrated. Cosmic Revelation transforms the two towers into flickering light sculptures in the evening hours in order to carry the studio's work to the outside. In this cooperation with astroparticle physicists of KIT, the entry of the invisible cosmic rays is measured live on site and converted into light. The installation can currently be seen on weekends in the evening hours.

From September 11-13, 150 physicists from German research institutions met at the Karlsruhe Institute of Technology (KIT) for their annual meeting. The participants are involved in the large-scale CMS experiment at the European CERN laboratory near Geneva or carry out theoretical calculations for it. At the workshop, the latest scientific results were exchanged and joint strategies coordinated.

The CMS experiment at CERNl explores the fundamental building blocks of nature and their interactions. The highlight of this research to date has been the discovery of the Higgs boson in 2012. Physicists from KIT, RWTH Aachen, Hamburg University, Münster University and the German Electron Synchrotron DESY have been making major contributions to this major basic research project for many years.

The workshop was opened by KIT Vice President for Research, Prof. Oliver Kraft. Among the guests were the scientific speaker of the CMS experiment, Prof. Roberto Carlin (Padua), representative of the Federal Ministry of Education and Research, but also young students of the nationwide "Particle World Network".

"The workshop offers our participants many opportunities for networking. This is particularly important for young researchers writing their master's or doctoral theses," said Prof. Ulrich Husemann of the KIT Institute for Experimental Particle Physics, the workshop leader.

In a colloquium on September 16, 2019, the KATRIN Collaboration presented its new limit for the neutrino mass in the FTU at the North Campus of the KIT. With lectures by Christian Weinheimer, Guido Drexlin, Kathrin Valerius, Susanne Mertens and Thierry Lasserre and a press conference, the extremely impressive result was presented, that far exceeded all expectations.

On October 9 and 10, the International Days will take place at KIT under the motto "Karlsruhe and the World". The program includes workshops, lectures, awards, an exhibition and much more related to the international activities of KIT and its partners. We would be very pleased if you could note the date and the event (Save the Date) and register soon!

On the occasion of this year’s 50th anniversary of the first manned lunar landing, Parrotta Contemporary Art shows the exhibition "From the Rocket to the Moon" in Cologne and Bonn. The works shown reveal various aspects and associations that illuminate the themes of "rocket", "moon", and "space". A broad visual spectrum is opened up, covering the entire universe – from the tiniest elementary particle to the unfathomably large galaxy.

The lightning and sound sculpture by Tim Otto Roth "Cosmic Mirror" (2008/2019) , which was realized in collaboration with KCETA, provides a concrete physical reference to the universe. The energies of the cosmic rays, which constantly strike our planet from outer space, brightly discharge once or twice a second and become visible and audible.

On 23 January 2019, KCETA again presented an event for the Karlsruhe public in the series "KIT im Rathaus". There were lectures on the topic "Forschung an Superbeschleunigern":

See the flyer of the event 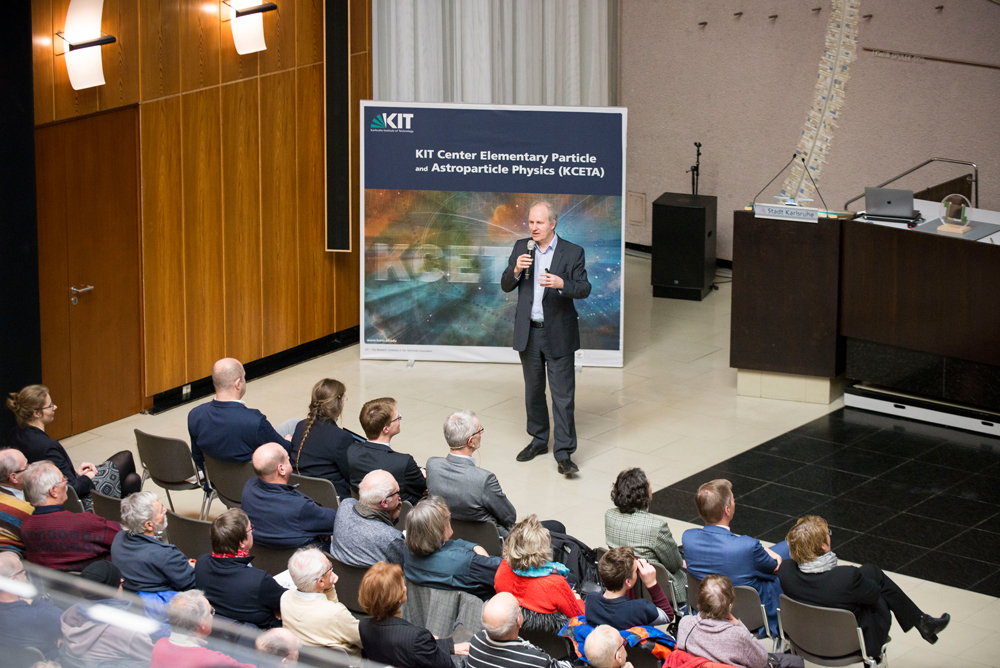 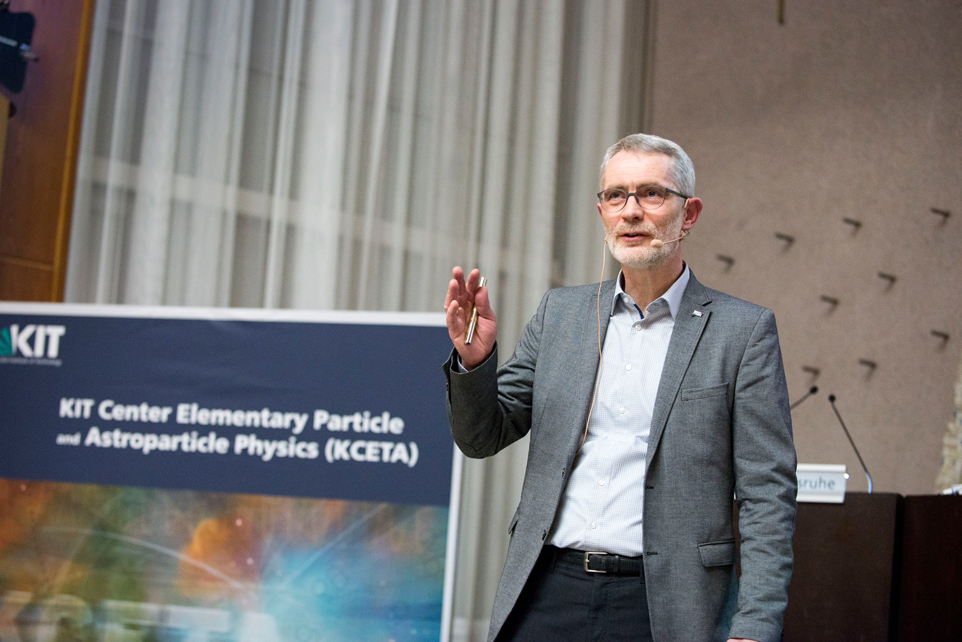 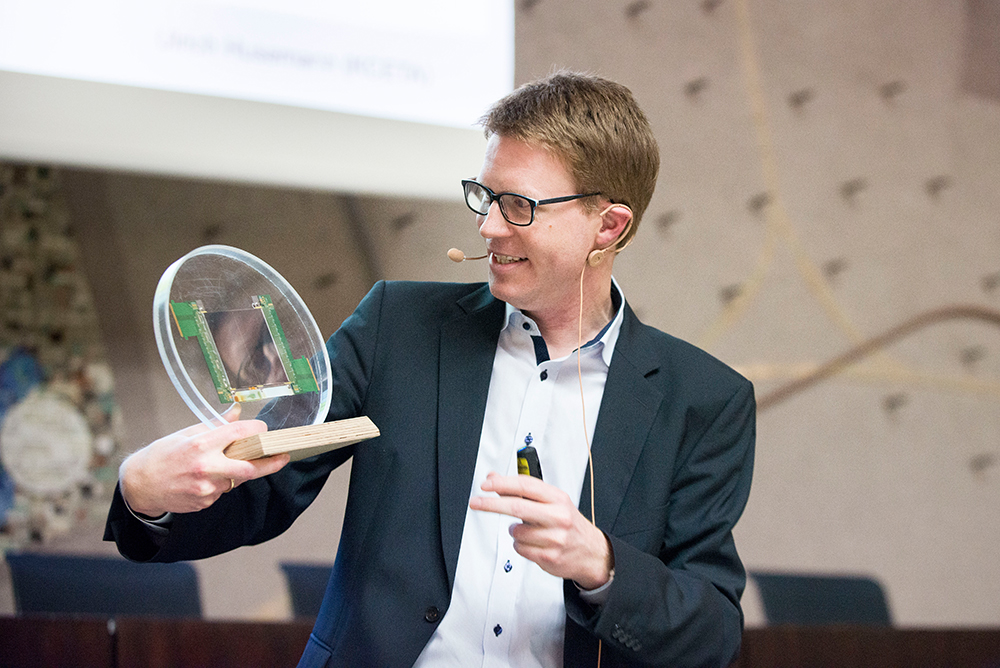 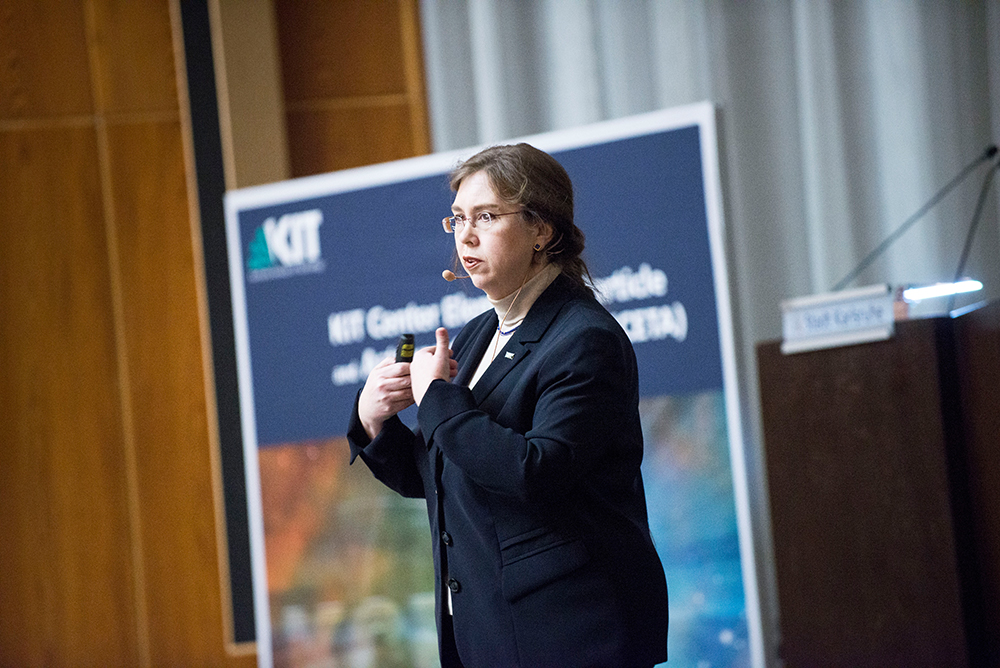 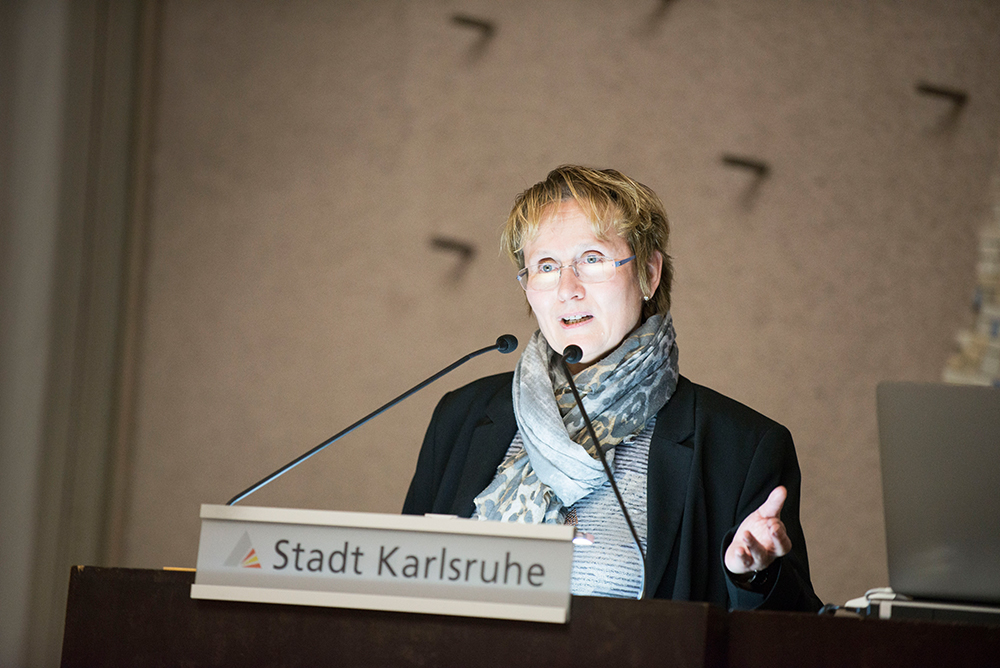 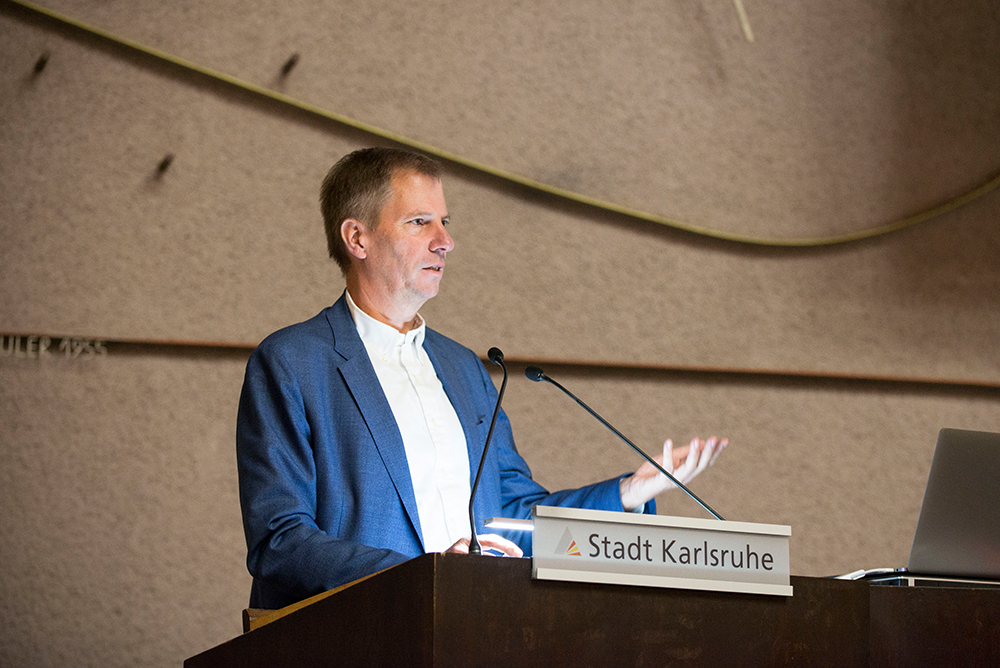 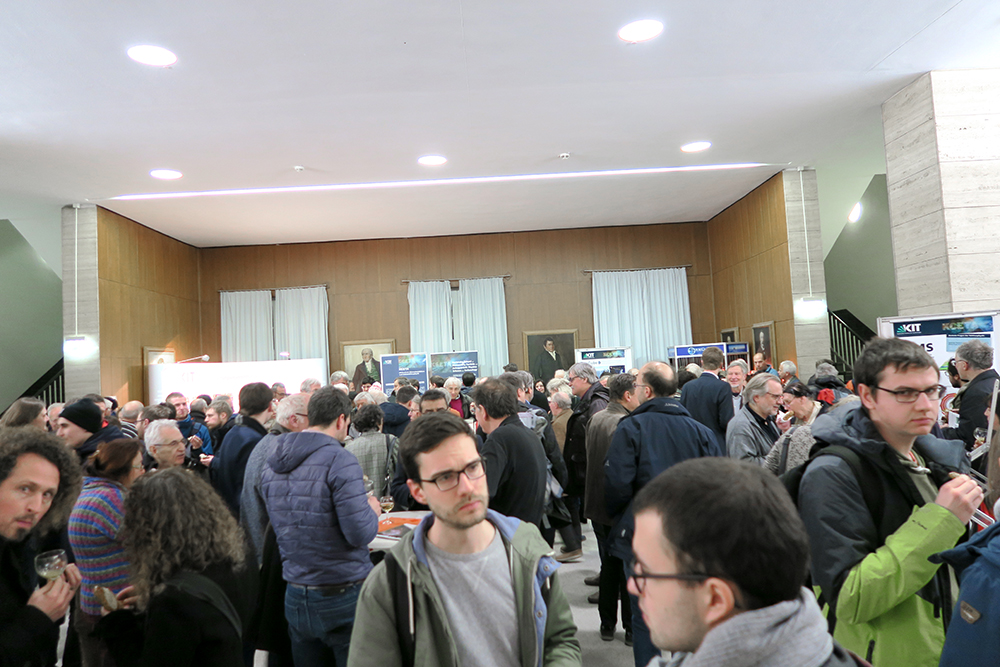 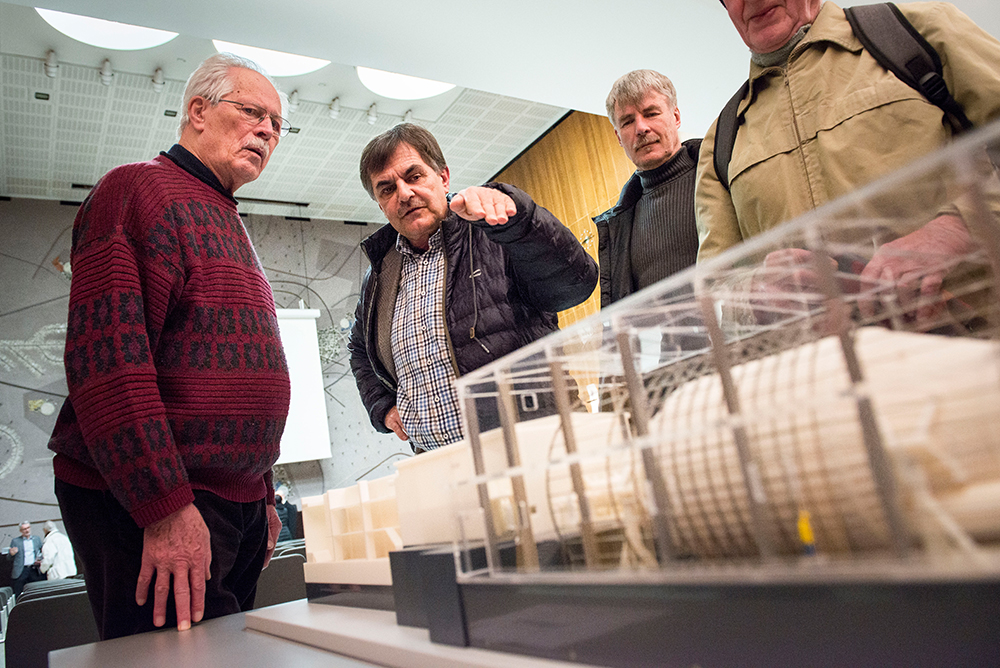 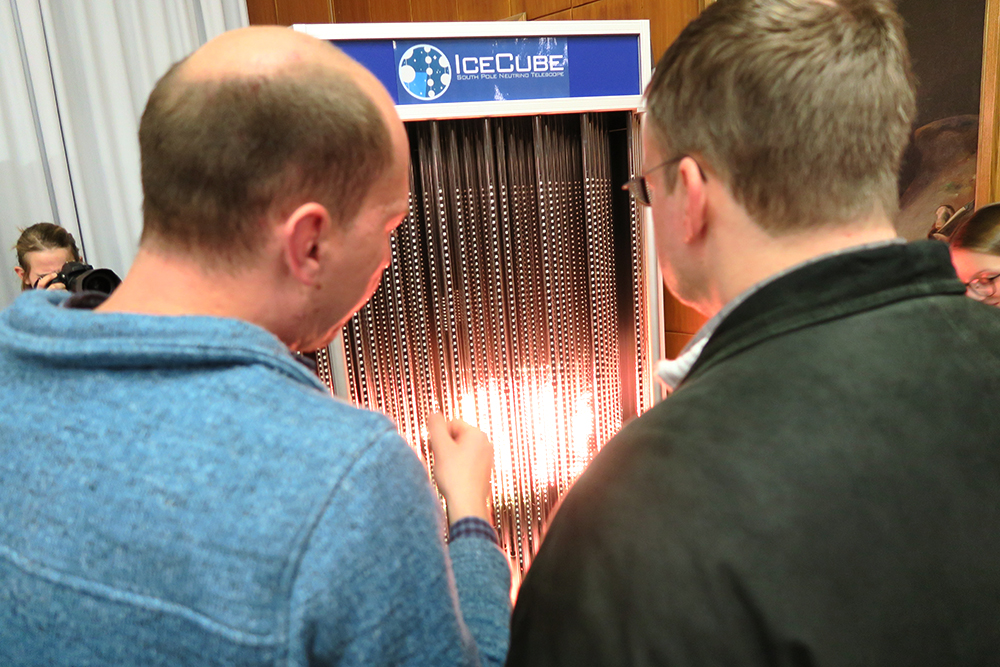 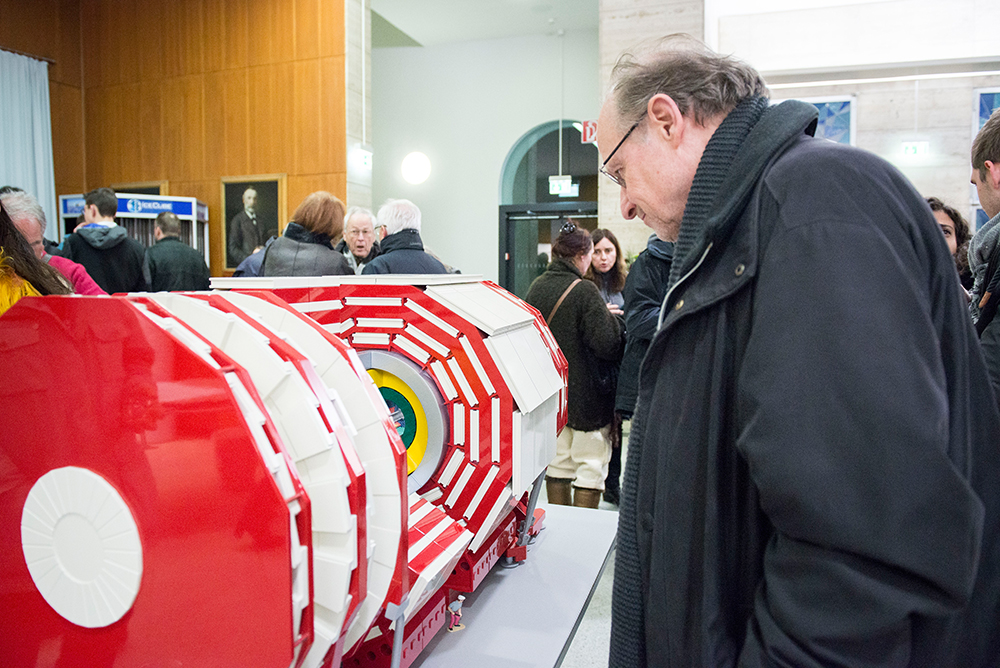 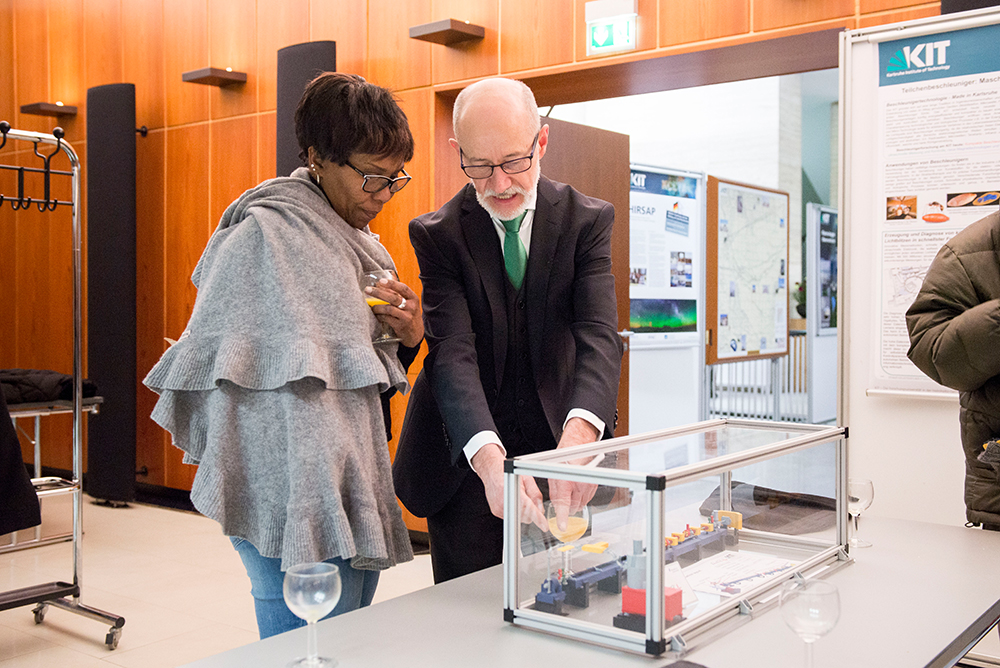